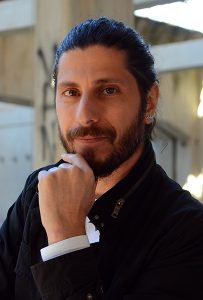 Manuel de Coco was born in 1975 in Athens, Greece, and studied film directing.

He is an award-winning director and writer working on feature films, documentaries, commercials, conferences and TV projects around the world.

He is also known for going to extreme places to explore   humanity’s relationship with spirituality.

He has directed documentaries for the National TV Channels of Greece (ET1, NET, ERT SAT); “Special Olympics in Athens” was the highlight of this project.

His first feature film “Unknown Land” was filmed in Yemen and in Israel. It has participated in 16 International Film Festivals (Sao Paulo IFF, Andrei Tarkovsky IFF, Cairo IFF etc.) and won several awards. The film has been banned in many countries of the Arab world and in Israel.

His next film is the upcoming documentary feature “Invisible World – Shambhala”, shot over a twelve-year period in Tibet, Nepal Mongolia, Russia, Italy, Greece, Israel and Palestine.

Currently he is developing the feature film “Whispers of God” which is an international co-production.

Supporting Mention for the censorship the film has endured  (FIFOG, 2012)